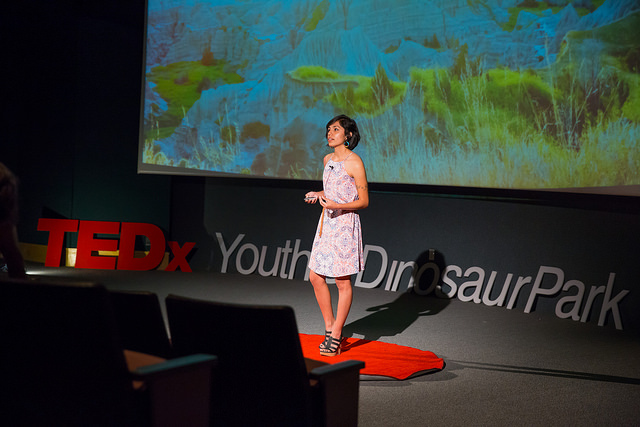 LCE Founder Maggie Dunne applied for a TED  license to produce a TEDxYouth event in Rapid City, South Dakota. Her goal was to produce an event which engaged both Native and Non-Native Youth as speakers and helpers and allowed them to engage in dialogues about their ideas worth spreading. After the application and review process was completed, TEDxYouth@DinosaurPark was born and WOW was it a success!

Among the speakers who shined were:

The event took a Village to Produce.

Organizers were: Maggie Dunne (Lead Organizer and Speaker Coach), Cindy Dunne (Organizer and Speaker Coach), Troy Fitzpatrick (Organizer and Venue Coordinator), the Journey Museum and Learning Center (event venue), the FILM ROCKERS videography team at the SD School of Mines, William White Photography (check out the Flikr Album), The South Dakota School of Mines (made the TEDx Lettering for the event), Office Depot Office Max in Rapid City, the Performing Arts Center of Rapid City and and a cast of more than 40 adult and youth helpers from Rapid City, Pine Ridge Reservation which reached into the local Rotary Clubs, LCE’s Youth Board and engaged Native and Non-Native community members.

We have assembled some of the videos here below…. ENJOY!

Special props go out to the SD School of Mines’ FilmRockers. Lead Media Director John Harrison coordinated all media necessary for filming, was a cameraman during the event and then edited all of the videos in the project! Thanks also to FilmRockers cameramen: Ezra Thorson, Charles Heyer, and Brian Roberts. You guys rock!

TEDxYouth@DinosaurPark took place in April 2016 and is the first TEDxYouth event ever produced in Rapid City, South Dakota.

In the spirit of ideas worth spreading, TED has created a program called TEDx. TEDx is a program of local, self-organized events that bring people together to share a TED-like experience.

TEDxYouth@DinosaurPark, where x = independently organized TED event. The TED conference provides general guidance for the TEDx program, but individual TEDx events, like ours, are self-organized.

← Supporter Spotlight: The Scarsdale Rotary Club
Stand Up for #CultureNOTCostume this Halloween →