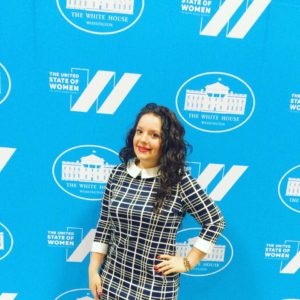 LCE Founder Maggie Dunne spoke in June of 2016 at the first ever White House United State of Women Summit produced by the White House Council on Women and Girls. She was in good company with an all-star agenda that included presentations by President Barack Obama, First Lady Michelle Obama, Oprah, Kerry Washington, Vice President Biden, Valerie Jarrett, Gloria Steinem, and Meryl Streep, just to name a few of many big names.

Founder Maggie Dunne explained how she came to be a speaker at the Summit: “I heard about the Summit from a friend and immediately applied to attend. A few weeks later, I received an invitation to speak at the Summit and, of course, I accepted the invitation!  The event was organized by Senior White House Advisor Valerie Jarrett who assembled a collection of amazing women with positive and inspirational messages. I spoke on a panel, but also attended many inspirational talks and panel discussions.  I left the Summit feeling positive, confident and motivated!”

Maggie published an article in FORBES Magazine about her reflections on the Summit, which focused on six key topics: economic empowerment, health and wellness, education, violence against women, entrepreneurship and innovation and leadership, and civic engagement.

After her presentation, Maggie was interviewed by Native American Television, NATV.

The video interview is posted below. Enjoy!