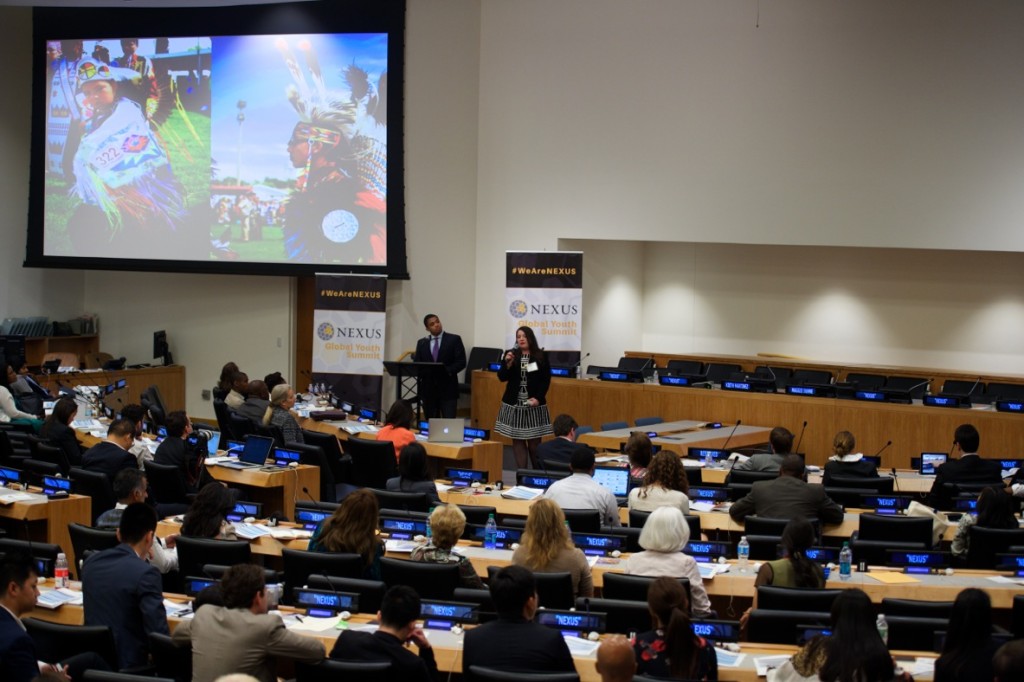 When Lakota Children’s Enrichment’s President Maggie Dunne accepted a speaking engagement at the Nexus Global Youth Summit, she asked LCE’s Youth Advisory Board Chair Keith Martinez to share the spotlight.  On July 24, 2014, the two appeared as plenary speakers at the Summit held at the United Nations in New York.

Maggie said: “The Nexus Summit presented a great opportunity to educate a global audience about the obstacles facing tribal communities in the United States, and I figured that people would gain a deeper understanding about the importance of our work if they heard directly from someone who has participated in our programs.  Keith has spoken at our Youth Summits, on panels and before Reservation schools, but this was an international audience of young philanthropists and business leaders — and we anticipated that the house would be packed (which it was).”

Keith said of the experience: “Speaking at the United Nations was an amazing experience that I will never forget! I was terrified every time I looked up from the podium and saw so many people watching and listening to my every word.”

In the Nexus presentation, Maggie Dunne described the history of over a century of broken promises and treaties that contribute to obstacles faced by the Lakota Sioux on the Pine Ridge Reservation in South Dakota — a community that the UN has described as one of the most marginalized and historically wronged indigenous communities in the world.

Dunne said she learned about Pine Ridge through a service trip in 2007. Seeing children without shoes and coats and teachers without enough books to distribute to students, she pledged to take action. The drop-out rate is roughly 70%, there is a suicide epidemic among the youth, and basic necessities (e.g, access to Internet, indoor plumbing and other amenities) are not readily available to all families on the Reservation.

Dunne described LCE’s programs, which address low self-esteem, the high drop out rates and the youth suicide epidemic, by providing mentorship, leadership development and opportunities for expression. LCE “fills gaps” caused by underfunded budgets, and works collaboratively with the community. LCE’s premiere programs include an annual Writing and Art Challenge, a Youth Advisory Board and Youth Summits.

Youth Board Chair Keith Martinez said that he first learned about LCE when Maggie Dunne reached out to his Reservation school to connect it with Scarsdale’s STEP program, an intensive college prep program in Scarsdale NY.  Keith said he always wanted to go to college and “jumped on the opportunity” to boost his academic standing.

When he arrived in New York, Keith found himself well behind grade level in all subjects. Acknowledging that catching up “wasn’t easy,” Keith worked real hard, and became involved with LCE. As Chair of its Youth Advisory Board, Keith helps deliver LCE’s programs on the Reservation and participates in service projects to help the community, when his college schedule permits.

Keith told the Nexus audience that his service work with LCE has won him two national awards: one from Youth Service America and another from the Center for Native American Youth (CNAY). This summer, the CNAY flew Keith to Washington DC to meet President Barack Obama at a Town Hall discussion in connection with the White House’s “My Brother’s Keeper” initiative.

The hall erupted into applause when Keith told the Nexus assembly that he is a rising Junior at Villanova University — where he is a Presidential Scholar and a Gates Millennium Scholar.

Martinez said of his accomplishments, “None of this would have been possible without LCE’s support and guidance— allowing me to give back to my community and encouraging me to be proud of my heritage.” 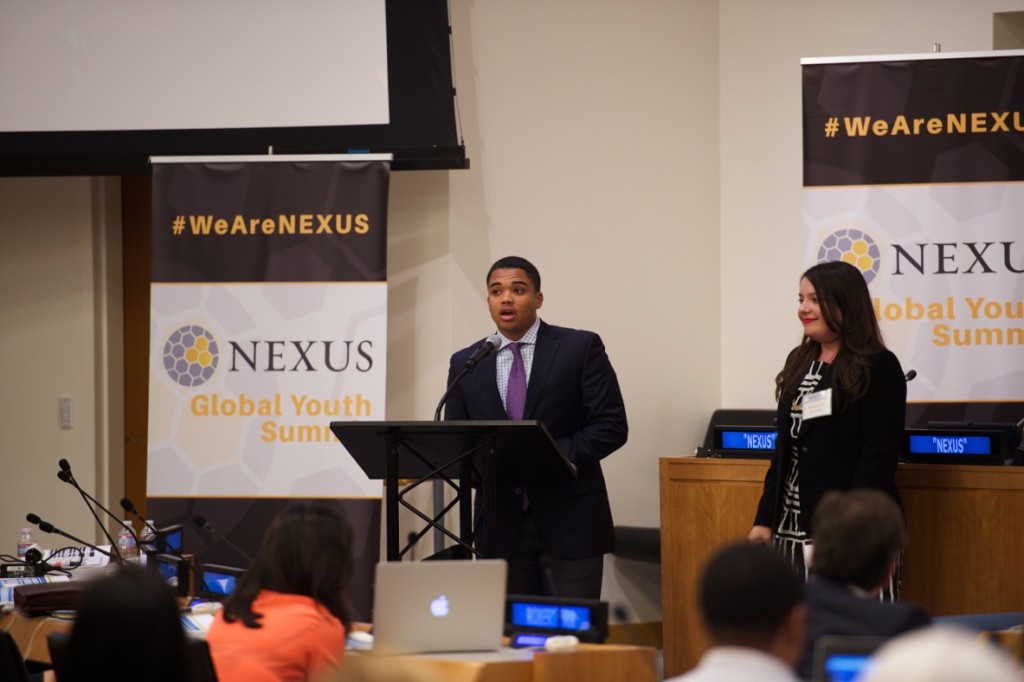 Maggie Dunne said that Lakota Children’s Enrichment opens doors by providing the kinds of opportunities that most youth in the United States take for granted, but are not available on Pine Ridge.  She said, “we offer a different kind of return — one that invests in America’s future. The next Zuckerberg, Jobs or Sandburg… might be among the youth we are working with, but the doors to opportunities are closed.”

Bravo to Maggie and Keith for representing Lakota Children’s Enrichment at the United Nations!

Nexus is a global movement of thousands of young investors, social entrepreneurs and allies who work to increase and improve philanthropy and social impact investing. The network collaborates to advance the potential of next generation leadership across nations and sectors as well as to bridge communities of wealth and social entrepreneurship for dialogue, education and collaborative problem solving. The membership includes people from more than 70 countries and hundreds of the world’s most influential families.

You may also be interested in related coverage about this event in the Scarsdale HamletHUB.