Teaming Up and Doing Good on the Rez

For the third year in a row, Inila Wakan Janis (Keith Janis) was Santa at a holiday party in Kyle!

At the end of 2013, our helpers on the ground brought smiles to the faces of hundreds of children on the Pine Ridge Reservation in SD. Thanks to generous contributions from our fans from around the world (including the UK, Germany and Italy), Lakota Children’s Enrichment sent two communities on the Reservation hundreds of gifts.  In an unexpected complication –  for the first year ever –  the Postal Service delayed some of our shipments, and as a result, many toys arrived AFTER Christmas (#PostalFail), but that did not deter Team LCE  from making sure that children received them!

Youth Advisory Board in Pine Ridge

With an assist from a few volunteer mothers and grandmothers, LCE Youth Board Members and their friends produced a gift giveaway on December 30, 2013 at the Suanne Big Crow Boys and Girls Club in Pine Ridge.  Originally scheduled for December 23, the party was postponed to the 30th because the majority of the toys did not arrive in Pine Ridge before Christmas (#HugePostalFail).   As gifts arrived before and after Christmas though, Youth Board members gathered, inventoried and wrapped the toys, toiletries and other items to get them ready for the December 30 event. 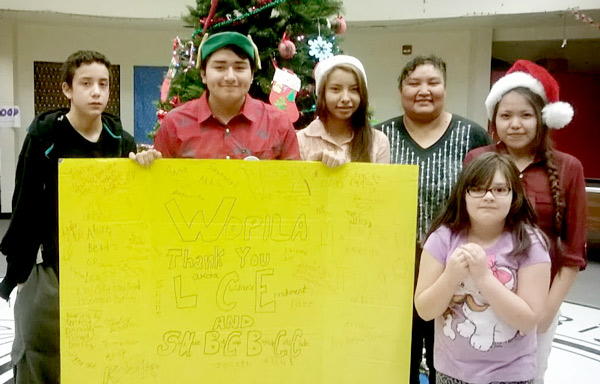 Huge thanks go to Youth Board members Bobby Pourier, Jr., Summer Montileaux and Colton Sierra  and their helping elves : Kevin Jack, Kylie Big Crow-Cornay, Tricia and Anpo, for doing all the wrappipng, packaging and work to ensure that the event was a success for children in Pine Ridge.  Another round of applause goes to CeCe Big Crow, Chick Big Crow, Janet Whiting, Jordan Big Crow, Marless Big Crow, Violet Bissonette and the Suanne Big Crow Boys and Girls Club for all their support, time, energy and pizza that kept the kids going! 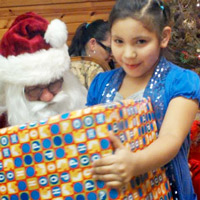 We provided gifts, candies, granola bars and shampoos to Santa Keith Janis (pictured here and at the top of this post). Keith has been our Santa-partner for the last three years.  Although only about half of the 200 toys arrived in Kyle before Christmas, Santa Keith plowed ahead with the Holiday Party on December 24, 2013, at the Meeting Hall of Our Lady of Sorrows Church, right in the heart of Kyle (Pejuta Haka).  Keith gathered a team from the community, they packaged and wrapped items for children and then, dressed as Santa, Keith greeted each child individually and gave them a gift. 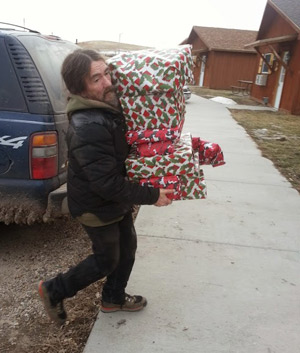 Because so many or our gifts arrived in Kyle after Christmas, Keith made house calls with toys to families in the surrounding region in the days following Christmas. Pictured on the left, Keith is seen arriving at a local hotel with loads of toys for  the Yazzi family.  The family of seven lost their home to a fire just a few days before Christmas, and temporarily are being housed by the tribal government at a local motel. Certainly, toys cannot cure their significant losses, but Keith managed to brighten the day for their children with loads of toys.

We thank Keith for his steady support and for his help with our projects in the community. 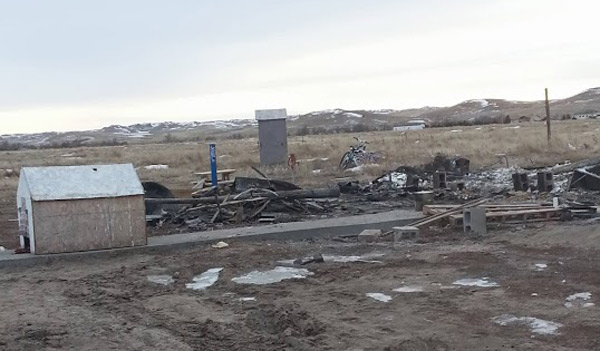 The former location of the Yazzi residence, which was destroyed by fire a few days before Christmas.

Lastly, we sent over-sized gifts like large floor puzzles and oversized play sets to the American Horse School in Allen, where they will be enjoyed in the preschool and day care centers.

Woplia Tanka (Many Thanks) to our friends and helpers, and