Oglala Lakota “Siouxicide” Crisis; What Can One Person Do?

I am sad to report that in 2009 suicide officially became an epidemic on the Oglala Lakota Sioux Pine Ridge Reservation in South Dakota. In December of 2009, Oglala Lakota Sioux President Theresa Two Bulls declared an “Oglala Sioux Tribal Suicide State of Emergency.” This action was taken at the close of a year that brought an unprecedented surge in the number of tribal suicides, and at the end of a month that saw four young tribal members voluntarily end their lives.

Last month, a newly appointed principal of a K-12 school told me about the frustration that he faces, in part, due to the recent surge in teen suicides. Currently, the school’s attendance averages only 25% of the student population. His under-funded school does not have enough textbooks to circulate to its students and morale is low among students and faculty. He reported that the wave of teen suicides has many children questioning the value of their lives and continuing in education. He asked for additional support for his students.

If the suicide crisis currently faced by the Oglala Lakota occurred in almost any other community in the United States, undoubtedly, it would be one of the nation’s top news stories.

Why are the children in crisis? Lakota children are losing hope because the economic and social obstacles to advancement that they face appear insurmountable. The poverty is spread out over a territory roughly the size of Connecticut, mass transportation is limited, access to clean water is limited, unemployment exceeds 60%, there is no sanitation system, no animal control, and most residents cannot afford internet access, computers, or cars. The Lakota lack essential resources and need aid in almost every aspect of life.

But these problems do not end at the edge of the Reservation. The Justice Department reports that one of every three Native American women will be raped in her lifetime. Amnesty International reports that non-Native men perpetrate 85% of the rapes. These appalling statistics reflect systemic problems on the Reservations and in the surrounding communities, where apparently, Native American women are viewed as easy prey.

As an advocate for change in Government policy with regard to indigenous communities and as the Founder of an entity that provides aid to children living on the Reservation, the Lakota Pine Ridge Children’s Enrichment Project, Ltd. (LPRCEP), I am repeatedly asked what one person can do to help the Lakota and similar populations struggling to survive in extreme poverty. First and foremost, my answer is that we can all help by spreading the word to those who are uneducated.

If you are wondering where to start, the answer is pretty much everywhere – most of our country has no idea that such extreme conditions exist within our nation’s borders, let alone the daily obstacles faced by the Lakota on Pine Ridge, where the average life expectancy reportedly is the lowest in the Western Hemisphere, aside from Haiti. History has shown that no significant government action will occur, however, unless there is awareness and pressure is brought upon our elected officials.

Although the Obama Administration has taken some action to support impoverished Native American communities (by increasing funding for law enforcement and some other programs), much more is needed. The Oglala Lakota Sioux on Pine Ridge face economic, social and infrastructural barriers that they cannot fix on their own. If people cannot get to work, and do not have water, heat, adequate health care, or shoes and coats suitable for the extreme weather conditions on the Reservation, then their basic needs of life are not met, and consequentially they are not able to cross over the poverty line. The effort to bring the residents of Pine Ridge and similar marginalized populations over the poverty line demands a huge investment of money, time and energy.

It is time for the United States government to step up and “bail out” the Oglala Lakota and similarly situated Native American communities in need of essential support, to enable them to become financially independent. The money invested today to build essential resources, will pale in comparison to the lives and money saved when the Lakota are able to fend for themselves. The Lakota are not losing their homes, yachts or Wall Street jobs; they are losing their lives.

The Lakota people say in a prayer, “Mitakuye Oyasin,” or, literally, “We Are All Related.” This part of our American family needs our help. Please do your part and spread the word to your friends, your neighbors and your elected officials.  By increasing awareness, you will be doing something meaningful to help. 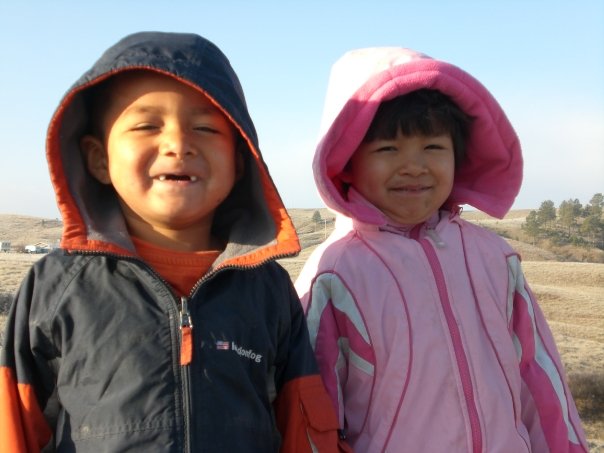 Two of our favorite residents of Pine Ridge. They hold onto hope for a better future.  We would like to keep it that way!

One Comment on “Oglala Lakota “Siouxicide” Crisis; What Can One Person Do?”